The “will to objectify” as Breton quotes, which grants objects an autonomous existence free of intellectual abstraction and practical use and yet filled with the intensity of whatever made us experience them as unique and alive.


During the ‘Where are we now” festival  an interactive event resulting in a 5 minute documentary was devised, prompting people to bring in an object and comment upon it.  This resulted in an intriguing insight on objects, and object identity.  Participants scoped the sentimental, metaphysical, psychological archaeological and interrelated nature of objects. Occasionally referring to a person or an audience as an object.  Or a work of art.  Or even made observations on how objects appear and transform through their reflection on mirrors, or how they can be used to familiarize,  exclamate, moderate reason, physicality and dream. These statements took on the form of objects in the video, to construct a commune entity, a geography of a commune collective object.  It is an empirical study on the conception of perceiving, and translating perception, through the course of observing the object, and justifying choice.

Durring the 10 day festival ‘Where Are We Now’ at Empros Theater People were called to bring in an object and comment upon it. 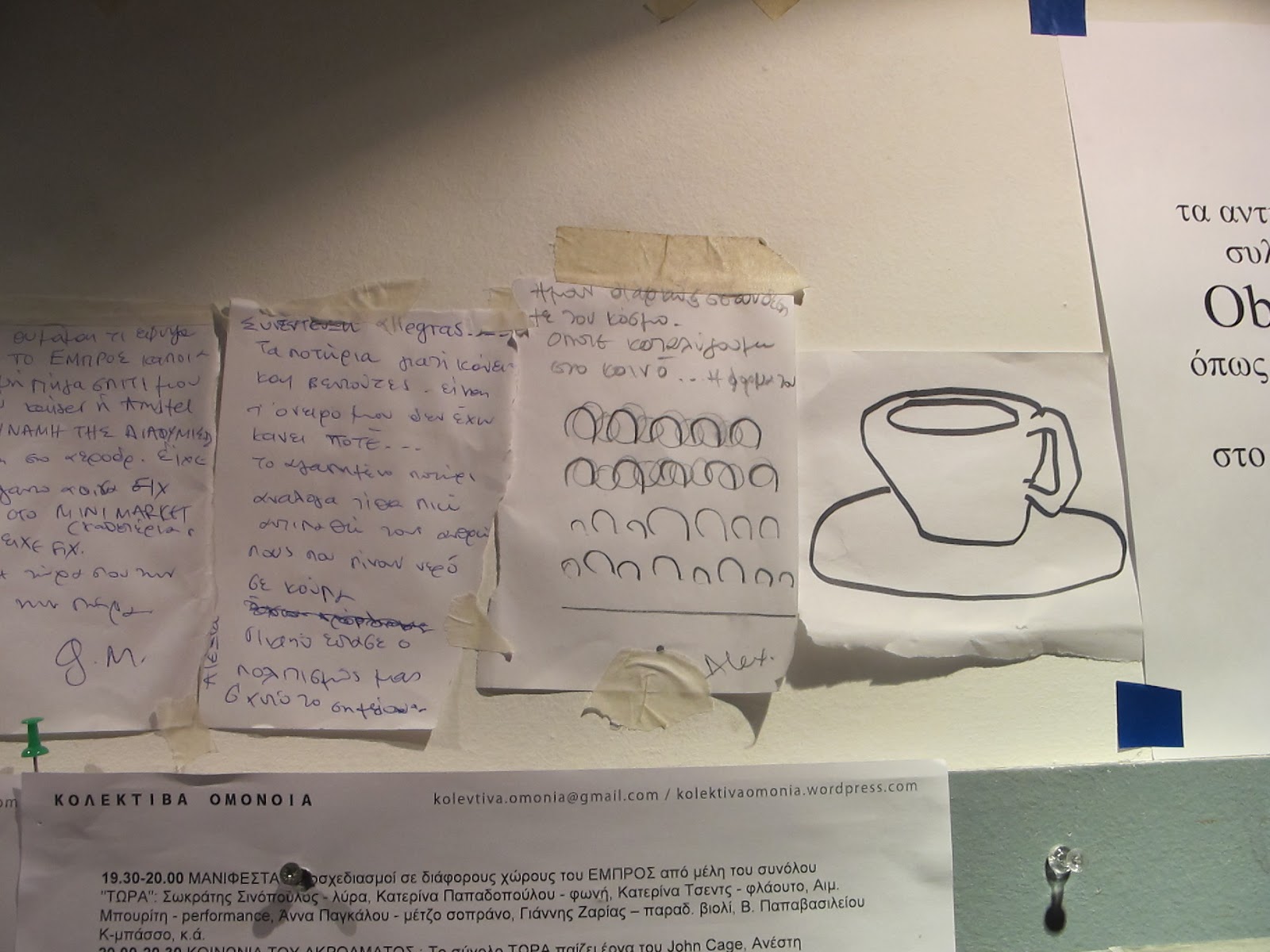 NE ME QUITE PAS
Τhe object for which  am going to talk about is the actor
(as quoted by Antonioni) sais that the actor is an object,
like all objects in a frame, like a vase or a chair.
he sees the actor as a form rather than a character.
Alexia for example is an onject***(missing text)*** to the camera.

The glasses because they do suctions,
it is my dream I have never done suctions.
What is your favorite glass vase..?
It depends on what I am to drink.
I dislike people who drink water in mugs..
This explains the point our civilization has come to.

I was in a continuous connection with the people.
Thus we come to the crowd… its form

I don’t recall exactly what time I left from Empros Theatre.
At some time I went home.  I drink Amstel or Kaiser.
The power of advertising.  I went to the Airport.
I saw a giant posting of Fix.
I went to the market – cafeteria, it didn’t have it.
So now that I saw it I bought it.

Erotically.  Neurotically.
The flames make me sick, I am sheer revelation.

It is a compass pointing to the south
but since it is written in Greek it still points to the letter N.

What does the hat mean to you?

The hat means a lot.
I was wearing hats since I was small, it was an elegant eccentricity.
My father was wearing hats.
I am deeply connected to my father through the wearing of hats.
At this time I have in my bag a leather cap.
And the last thing I wish to tell you about this matter is that
I am bold and during summertime it helps me avoid getting burned
and at winter time not to feel cold.

The rottenness of the town for some is charming,
even for me who is a village boy deep down.
Connection lies in on lack of defense.

It is an object that has a specific use
that lies in the getting together in deeper levels of communication.
It is the lubricant durex.

It is an object pinned to the centre of the space.
A cone with the open upwards,
and all around feathered birds, dead
and the landscapes ***** ** their texture plastic.

I thought of Africa. Comme forme.
La forme d’ Afrique une bell forme, un  beau nom.
I happened to see something the some musicians were performing,
a projection, like a ritual, in slow motion..
I thought… form..
*******text missing******** 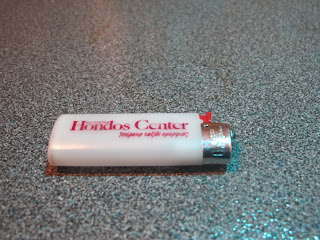 'it would be nice to have someone bringing in a Hondos Center lighter
they stooped producing them, we always used to find these lighters around'
said while looking for a ligher, 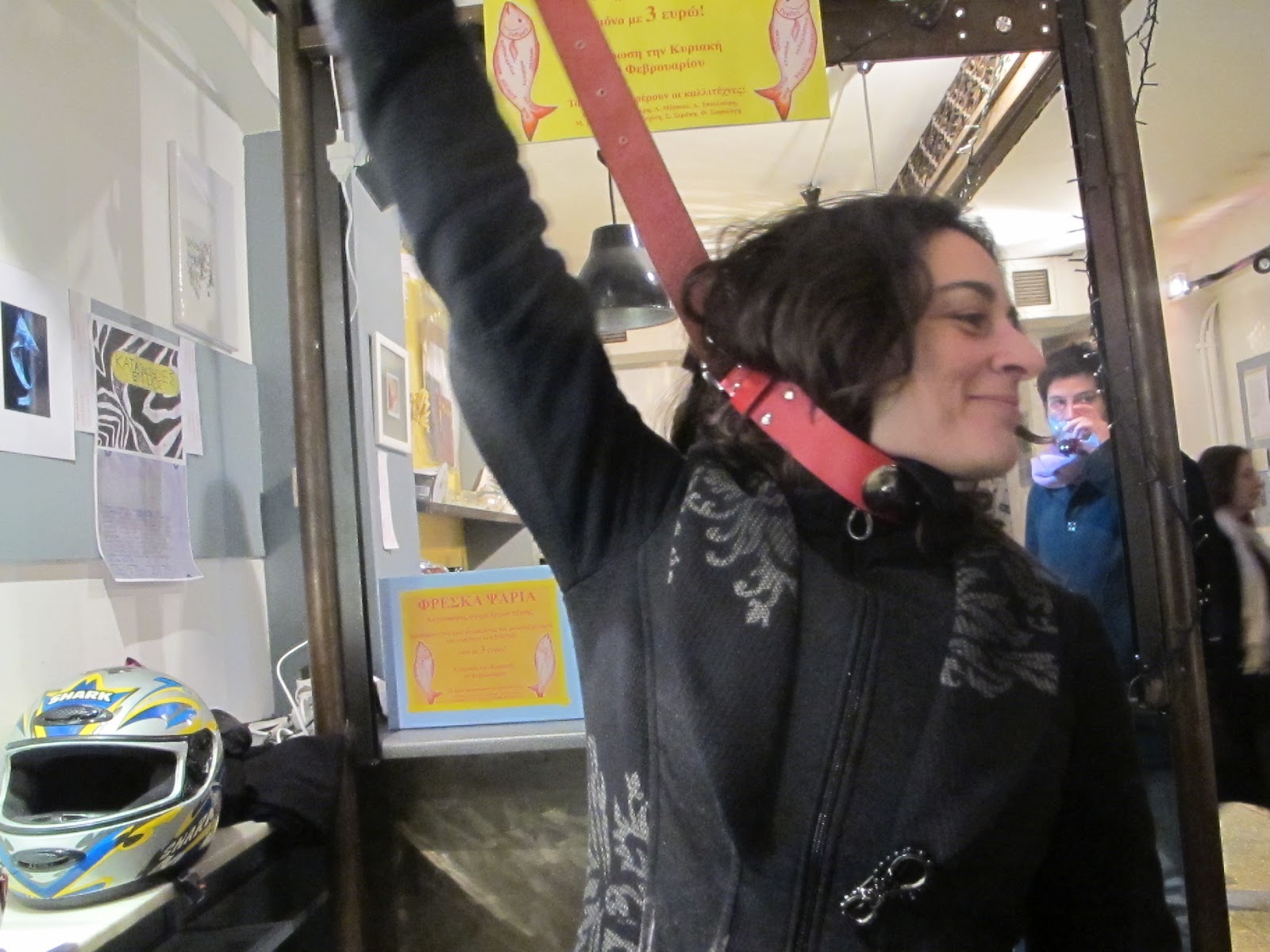